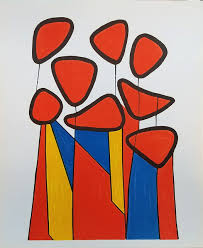 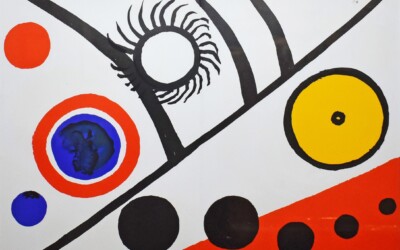 Alexander Calder, whose illustrious career spanned much of the 20th century, ranks as one of the most influential artists of the last 100 years. Born in 1898 to a family of celebrated and classically trained artists, Calder utilized his innovative genius to profoundly change the course of modern art. He began by developing a new method of sculpting by bending and twisting wire – essentially ”drawing” three-dimensional figures in space. He is renowned for the invention of the mobile, whose suspended, abstract elements move and balance in changing harmony.

Calder worked in a time of artistic upheaval, yet chose to embrace a more lighthearted approach to his art. His impressive output of paintings, lithographs, and sculpture brought with it a humor and sense of play that ignored the formal structure of what art could be.

His first New York exhibition was in 1928 and was followed by major shows in Paris and Berlin. Calder quickly gained international recognition for his work in abstraction, and in 1932 exhibited his first moving sculpture in an exhibition organized by Marcel Duchamp (who coined the word ”mobile”). From the 40’s on, Calder focused not only on large-scale sculptures, but on an impressive oeuvre of paintings and prints that exhibit the same sense of buoyancy and wit. His shapes and colors, along with bold, unbroken lines, were instantly recognizable for their dynamic sense of movement.

The artist enjoyed great success during his long and prolific career and passed away just a few weeks after the opening of a retrospective at the Whitney Museum. His work is now featured in prominent museum and private collections worldwide.