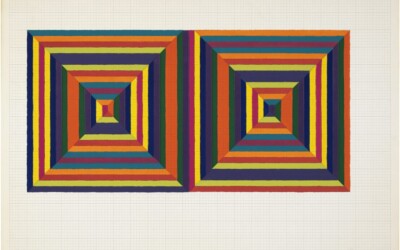 Frank Stella, the renowned Minimalist painter and printmaker, was born in Massachusetts in 1936. One of the great innovators in world of art, he has suggested that his painting was significantly shaped by being among the first generation of artists for whom the rightful existence of abstraction was assumed. He has steadfastly maintained that it was the only post-war idiom capable of sustaining the highest ambitions for painting.

After graduating from Princeton, Stella went to New York and took up painting seriously. The creation of two essentially accidental, transitional paintings guided the way for a 6 month journey in which he penciled lines on raw canvases, partially filling in the open spaces with black house-paint. The process left stripes that appeared to have uncertain parameters between the penciled lines. They became known as The Black Paintings, and four were first shown in 16 Americans (1959–60) at the Museum of Modern Art, the exhibition from which the museum purchased The Marriage of Reason and Squalor (1959; New York, MOMA).

Since that time, Stella has not only focused on painting, but printmaking as well. Since he explored both areas simultaneously, his print series were often named after paintings in which he explored similar themes. From 1967 on, he has used lithography, screen printing, intaglio and relief printing, often combining them in complex mixed medium prints. The Circuits series from 1982, created simultaneously with the paintings of the same titles, extended the iconography of the racing theme first referred to in the Aluminum Paintings series. In these he employed etching, wood blocks and engraved elements to create an unusual mixture of intaglio and relief. In 1975 he made 183 hand-painted and collaged reliefs of cotton-pulp paper in small editions.

Today, Stella’s work is included in most major museum collections, and important exhibitions of his work have been held mounted worldwide