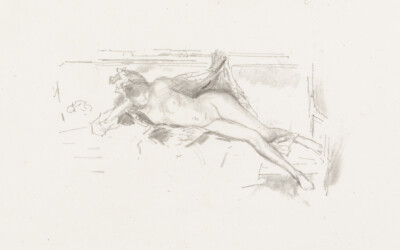 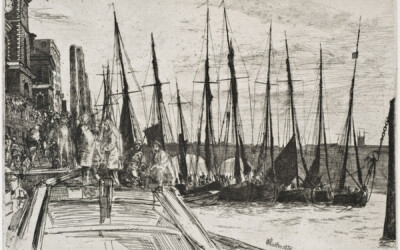 James Whistler, one of the leading figures of late 19th century art, was a painter of rare sensitivity and talent; however, he was also lauded as one of the greatest etchers since Rembrandt. Even when bankruptcy proceedings forced the sale of Whistler’s studio and its contents, it was his reputation as an etcher that proved the means of achieving new heights in his career and rebuilding his fortunes. In fact, in 1859 Whistler submitted two etchings and a painting to the Salon: the etchings were accepted and the painting rejected.

Whistler began his career as an etcher working for the United States Costal and Geodetic Survey. There he learned to etch and bite a plate with great detail and skill. Within five years of publishing his first etching, Whistler had received critical acclaim for his prints, and in 1863 he won a gold medal at an international exhibition in Amsterdam.

Whistler’s etchings and drypoints were all drawn directly on the plate, some being worked on over a period of time, some finished at one sitting. He was accustomed to carrying copper plates and etching needles with him either wrapped in his pockets, or between the pages of a book. Thus prepared, he was able to make a record at a moment’s notice of anything that caught his fancy. This fact alone makes Whistler one of the most quintessential Impressionist printmakers.

Today, Whistler’s paintings and etchings are featured in most major museum and private collections worldwide.