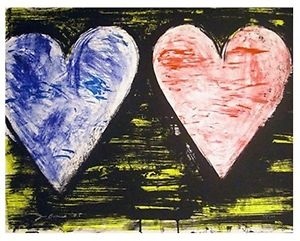 Jim Dine, one of the masters of Pop art & Neo-Expressionism was born in Cincinnati Ohio in 1935. After graduating from Ohio University, he moved to New York and quickly gained notoriety for his “Happenings” – a chaotic form of performance art. In 1962, he was featured with artists including Lichtenstein, Warhol, and Thiebaud, in “New Paintings of Common Objects,” the first museum survey of American pop art, which was presented at the Norton Simon Museum in Pasadena.

Even with the commercial success Dine enjoyed in the 60’s, he was still not satisfied. He pushed the boundaries with a body of work considered so risqué that the police raided an exhibition at the Robert Fraiser gallery in London.

In 1970’s and 1980’s, Dine was viewed as a forerunner of the Neo-Expressionists. His work became more sensual and romantic, with a greater emphasis on the grand gesture. He began using everyday objects from his environment, such as tools, shoes and other articles of clothing, and elevating their importance by featuring them in his work. The very personal iconography soon extended to series based on artists’ palettes, hearts and bathrobes, as well as recurring motifs such as gates, trees, and appropriations of the Venus de Milo.

Jim Dine’s work is featured in numerous public collections, including The British Museum and the Tate Gallery, London, the Hirshorn Museum, Washington, D.C., the Metropolitan Museum, the Guggenheim and the Museum of Modern Art, New York,