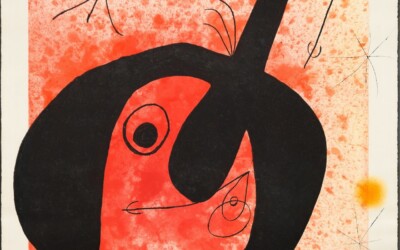 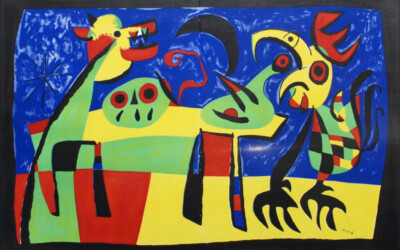 As one of the masters of Modern art, Joan Miro’s long and storied career was enhanced by his notable achievements in printmaking. His exploration of various techniques, including lithography, etching, aquatint, and later, his groundbreaking work with carborundum, led to the creation of an impressive body of graphic work. His original prints are featured in major museum collections worldwide and their impact on the evolution of 20th Century art is incalculable.
To understand the modern artist, Joan Miró it is essential to understand the political and social ramifications under which he lived and worked.

This was a time of explosive change. WWI brought with it total warfare where civilians and soldiers alike were massacred. Europe lost an entire generation. Then closely on its heels followed WWII and the atomic bomb. This was the age of the machine as the first Model-T rolled off the assembly line and electrification and refrigeration entered our homes. On a more human level Freud and Jung and battled over the subconscious. Einstein’s new toy blocks of time/space and mass/energy usurped old laws of science. The world had changed and so too did our understanding of reality.

Between the wars art lost some its raw, modern energy and became dominated by two philosophical movements, Dada and Surrealism, which primarily arose out of the atrocities of WWI. Artists became introspective, exploring their own irrationalities. From its inception, Surrealism took on two directions: The first represented by Miró, Mason and Matta is termed organic, emblematic, biomorphic and even Absolute Surrealism. It is dominated by automatism, which is a “dictation of thought without control of the mind.” Forms tend to border on abstraction although degrees of imagery can be detected. Its origins are found in experiments of chance. The second branch termed Super-Realism or Naturalistic Surrealism was headed by Dali, Roy, Magritte and Delvaux. It focuses on meticulous attention to detail, where a recognizable scene or object is taken out of context or distorted. Freud’s conclusions about the subconscious and dream states were fundamental to this thought process. Overall, Surrealism took the form of fantastic, absurd or poetically loaded images, which sprang from pure creative impulses, unrestrained by convention or laws.

Miró The Artist
Miró was born in 1893 in Catalonia, Spain. Although he traveled extensively, it was his homeland that he identified with the most. His first independent paintings executed between 1916-18 showed the impact of Cézanne, Van Gogh, Matisse and Picasso. But it was during a trip to Paris in 1919 that Miró became acquainted with the leading avant garde artists of the time. Instantly, Miró was swept up with the tide of the Surrealist movement. From the mid-1920’s through the 30’s Miró’s experimented with collage and assemblage. Broken dishes, torn newspapers and bits of furniture were reconstructed into abstract organic shapes. This period is considered his most serene and mysterious. This was soon to end with the onslaught of the Spanish Civil War. Miró demonstrated in his art his internal repulsion to the death, decay and disease brought forth with the rise to power of the Fascists. With the outbreak of WWII, Miró permanently relocated to Mallorca. The next few years, became years of years of contemplation during which he completed a series of lyrical compositions entitled Constellations. After the war, he dramatically experimented with bold shapes, patterns and colors, painting in intense heavy brushstrokes. He looked to primitive arts, Romanesque architecture to Gaudi creations in Barcelona. From 1961-70, termed the years of maturity, Miró refined and reduced his palette concentrating on purely the essentials: the earth, sky, sea and heavenly bodies. From the 1970’s till his death in 1983, he experimented with various techniques such as splashing, trickling and dripping of paint. In his later years Miró work was tinged with spontaneity, that became his signature.

Miró as a Graphic Artist
From the context of Miró’s overall career, his graphic work occupies a very important position both in quantity and quality. He worked in stencils, woodcuts, lithographs and etchings. Miró first ventured into prints in 1928, creating 8 stencils to illustrate Lise Hirtz Il etatit une petit pie. A year later he created a series of black and white lithographs for Tristan Tzara’s L’arbre des voyageurs. In 1933, he was commissioned to do three etchings for the poems of Georges Hugnet. Miró learned some of his most experimental techniques at the Lacourriere atelier in Montmatre. It was here that he became accomplished in the various aspects to the copper-acid etching process. In 1937, Miró completed a stencil for the publication Aidez l’Espangne, which collected funds for the Republican forces during the Spanish Civil War. In this work, one sees a man raising his fist as the inscription reads: In the present conflict I see the decrepit forces of the Fascist faction, and on the other side the people, whose vast creative resources will give Spain a strength that will astonish the world.” It later appeared as a poster that toured internationally. After the Spanish Civil War in 1939, Miró worked on 50 black and lithographs entitled the Barcelona Series that depicted the destruction of war. It was not until 1950 that he tried woodcuts. And he did not venture into color until 1952 with the color etching Series I. By the 1960’s he had mastered the etching process and sought new avenues of experimentation with relief prints in cement and the application of carborundum. Miró was constantly experimenting with materials, paint gestures and stains. In his last years, as a testament to his generosity, he set up a studio in Son Boter, Spain for young and aspiring artists thus continuing his legacy.