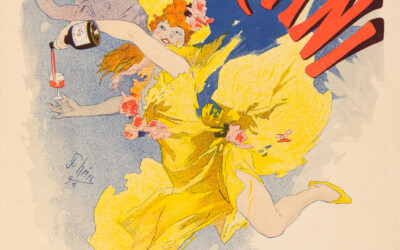 Jules Chéret is regarded as the father of modern lithography. This father of the modern poster, created not only a new art form but a new industry as well. His training as a lithographer, superb draftsman, and his innate sense of color enabled him to raise the technical and esthetic levels of the poster to new heights of artistic sophistication.

Large outdoor posters appeared for the first time in the last half of the 19th century, as the street had become the common man’s art gallery. This changed life in the streets of Paris forever. At age thirteen, he began a three-year apprenticeship with a lithographer and then his interest in painting led him to take an art course at the École Nationale de Dessin. He spent his Sundays sketching and studying paintings in the Louvre. While in his twenties Chéret made two trips to London to seek work, as he had been designing book covers and posters for operas, circuses, and music halls. Chéret’s was introduced him to Eugene Rimmel, a famous perfume manufacturer and philanthropist, and it became a turning point in the artist’s life. Rimmel, over a period of time, became Chéret’s patron and together they traveled through Europe and North Africa.

The greatest artists of his time were his friends and admirers, including Monet, Degas and Seurat. In addition, artists including Toulouse-Lautrec, Steinlen, Willette, and Legrand, admired and accepted him as a leader in the field of advertising art.