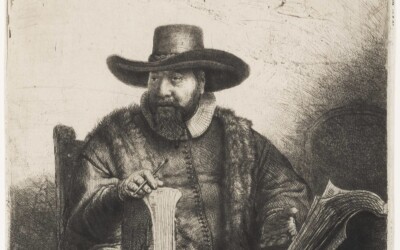 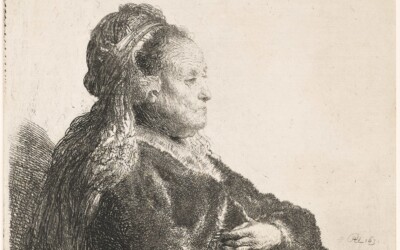 The Artist’s Mother Seated, In An Oriental Headdress: Half Length 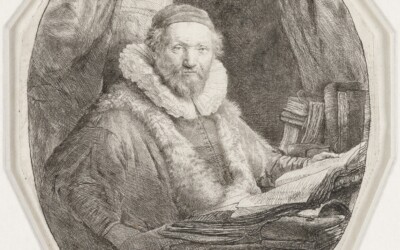 Jan Uytenbogaert, Preacher for the Remonstrants 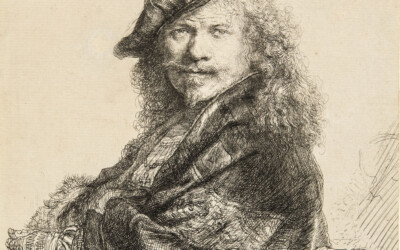 Self Portrait Leaning on Stone Sill

Rembrandt Harmensz Van Rijn was born the son of a miller on July 15, 1606 in Leiden, the Netherlands. Though his father had hoped he would continue with the family trade, he was determined to pursue a career as an artist. By 1631 his work had become well known, prompting him to move his studio to Amsterdam, where he soon became the leading portrait painter in Holland. His reputation flourished rapidly and he received commissions for portraits as well as Biblical scenes. His beautiful wife Saskia van Uylenburgh, whom he married in 1634, served as the model for many of his works, and his success at the time was reflected in the spirited nature of his work. By the late 1630’s and early 40’s however, Rembrandt had experienced a rapid succession of tragedies. Three of his four children died in infancy over a period of only a few years, and his wife passed away in 1642. At that time, Rembrandt adapted a more somber and less flamboyant approach to his craft.

Rembrandt undoubtedly created some of the finest etchings in the history of the medium. Using only a metal plate and an etcher’s tool, Rembrandt takes his viewers through a detailed and intimate visual journey. Working primarily with Biblical subjects and portraits, though also exploring genre scenes and landscapes, Rembrandt secured his status as the greatest artist of his time – if not the greatest etcher of all times. Even modern masters Marc Chagall and Pablo Picasso credit him as the most important influence on their own printmaking careers. Rembrandt himself was influenced by the work of Caravaggio, the revolutionary sixteenth century Italian painter known for his dramatic use of light – a technique easily recognizable in Rembrandt’s own work.

Rembrandt’s subjects are universal, and his works are timeless. One is confronted with the same intensity of emotion, when truly studying one of the artist’s etchings, as viewers were in the seventeenth century. As superlative examples of etching, composition, line, and form, Rembrandt’s works are of the highest caliber.