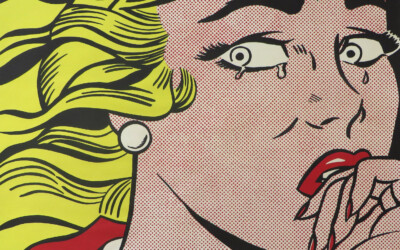 From 1957 to 1960, Lichtenstein obtained a teaching position at the State University of New York, Oswego. By then, he had begun to include loosely drawn cartoon characters in his increasingly abstract canvases. From 1960 to 1963, he lived in New Jersey while teaching at Douglass College, a division of Rutgers University in New Brunswick, New Jersey. He met artists such as Jim Dine, Allan Kaprow, Claes Oldenburg, Lucas Samaras, George Segal, and Robert Whitman, who were all experimenting with different kinds of art based on everyday life. In 1961, he began to use typical elements of commercial art, comics and advertisements in his drawings and painting and introduced his Benday-dot grounds, lettering, and balloons. From 1964 and into the next decade, Lichtenstein sought an anonymous style, removing all personal reference from his work to convey the appearance of mass production. Borrowed imagery from the pages of magazine advertisements and newspaper comic strips became the focus of his compositions. He successively depicted stylized landscapes, consumer-product packaging, adaptations of paintings by famous artists, geometric elements from Art Deco design (in the Modern series), parodies of the Abstract Expressionists’ style (in the Brushstrokes series), and explosions. They all underlined the contradictions of representing three dimensions on a flat surface. Roy Lichtenstein did cartoon inspired paintings that helped launch the Pop Art movement.

Lichtenstein continued to question the role of style in consumer culture through the 70’s, 80’s and the early 1990’s. In his attempt to fully clutch and expose how the forms, materials, and methods of production have shaped the images of Western society, the artist has also worked with other mediums, ceramics and enamelled steel.

Lichtenstein participated in the Venice Biennale in 1966, and was honored with solo exhibitions in 1967 and 1968 at the Pasadena Art Museum and the Solomon R. Guggenheim Museum, New York, respectively. The artist was the subject of a major retrospective at the Guggenheim in 1994, and his works today are featured in most major museum collections worldwide.