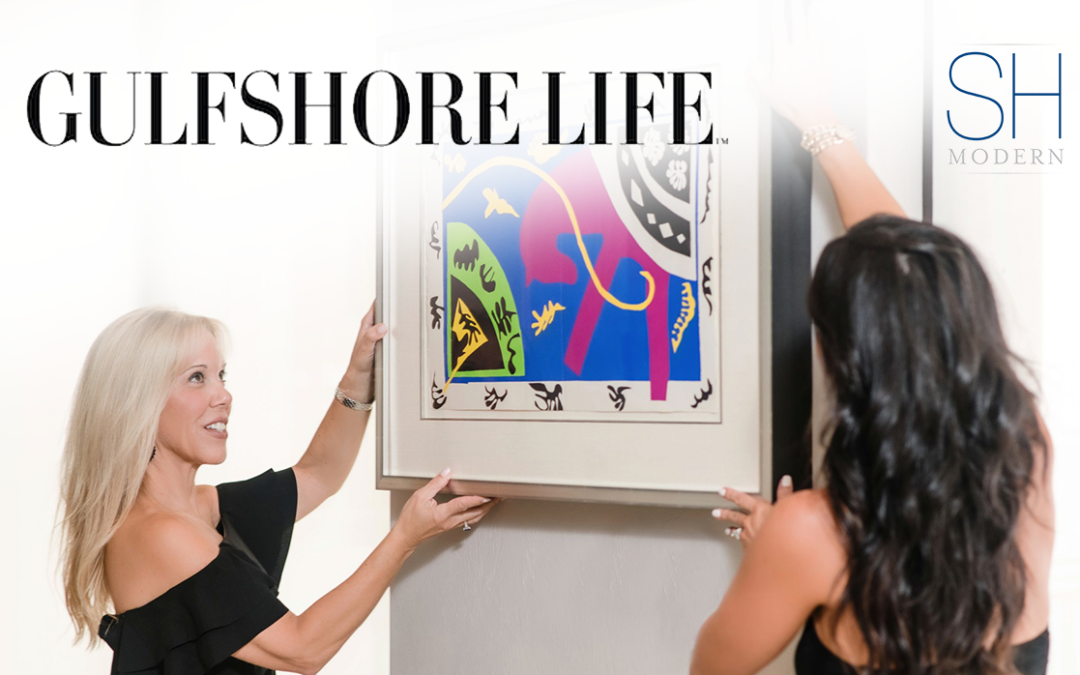 Bad views are not a problem at SH Modern Art’s Fort Myers showroom. Take the lively Henri Matisse “Le Cheval, l’écuyère et le clown” pochoir framed on the wall. It hangs near a floor-to-ceiling window offering views of the Caloosahatchee River. The two work in tandem—Matisse’s organic, muscular shapes echo the flowing waters outside, creating continuous lines between the two. But art advisor and owner of the firm Sallie Hirshberg says neither the pedigree of the artwork—which is one of a 250-piece edition that was exhibited at New York’s Museum of Modern Art— nor the rippled water determined where she hung the piece. “It’s very light sensitive,” she explains. Hung on a strip of wall between two sets of sliding doors that reveal the river just outside, the Matisse fits between the light sources, protected from the sunlight, as it illuminates the chromatic work without making direct contact.

This is but a mere hint of the insight that Hirshberg and SH Modern provide to clients all over the world. “Our focus is transparency and education about what, exactly, the collector is buying,” she says. Aside from dealing in original etchings by Rembrandt van Rijn, SH Modern also specializes in works on paper by Henri de Toulouse-Lautrec, Joan Miró, Pablo Picasso, Camille Pissarro, Salvador Dalí, Marc Chagall and, of course, Matisse, among others.

Hirshberg began her career in Boston, where she spent a decade working as an art advisor for a Fidelity Investments subsidiary after graduating from Boston University with a major in art history and a minor in business. She founded Galerie d’Or-say on Boston’s Newbury Street in 2000, which, as it evolved, specialized in old masters and living artists. Along the way, she cultivated relationships with cultural figures such as Anne Hawley, the director of Boston’s Isabella Stewart Gardner Museum from 1989 until 2015, and Christine Argillet, daughter of Pierre Argillet, who was a pivotal publisher, collector and friend of Dalí.

Eventually, Hirshberg’s focus began to shift, and by 2014, she was compelled to open SH Modern. Though modern is in the name, the showroom focuses on modern and contemporary works. While the terms modern and contemporary seem synonymous, that’s not the case when it comes to art history. Modern is loosely considered artwork from the mid-to-late-1800s through the end of World War II or mid-20th century. Contemporary applies to artwork from the mid-20th century onward and includes artists living and working now. Hirshberg notes that while SH Modern deals in a multitude of genres, spanning from the 16th century to contemporary works, she specializes in modern masters. The stock in the showrooms is constantly changing, with works by Chagall, Mary Cassatt, Alexander Calder, Andy Warhol and Roy Lichtenstein. Hirshberg’s expertise in the area is longstanding: In 2005, she launched her first Dalí exhibition in Boston in partnership with Christine.

Opening the new firm wasn’t the only big change Hirshberg had in mind. By 2016, she was ready to leave New England, and with family and artwork in tow, she found her way to Fort Myers. “I fell in love with the sunsets, beaches and appreciation for art in this community,” she says. “Coming from Boston, I wanted to have a home base that was tranquil. And I have always admired [Rauschenberg],” she adds, referring to the famed artist who moved to Captiva Island in 1970 and established his main residence and studio there until his death in 2008.

While as an art advisor, her primary role is with the clients, Hirshberg is taking a community-centric approach, too. Fort Myers-based FineMark National Bank & Trust recently acquired works by English photographer Rebecca Reeve from SH Modern to be exhibited in the community room of the bank’s new College Parkway headquarters. Through Jan. 31, Hirshberg has committed to donate a portion of the proceeds from Reeve’s haunting landscape photographs to AIRIE (Artists in Residence in Everglades).

Her space has also become a popular destination for well-heeled collectors who visit from near and far to take in the sights. If the bold shapes of the Matisse pochoir reflect the bold rhythms of the Caloosahatchee coursing nearby, then another painting echoes the water’s glittering, fluid surface. “Gold Reflections of a Special Time” by New York-based artist Kathy Buist is a mixed media painting interspersed with 24-karat gold leafing (or gilding). The artist is solely represented by Hirshberg, and SH Modern also works closely with other contemporary artists across North America, such as Richard Roblin, Heidi Spector, Sky Hoyt and Lori Cozen-Geller.

The ability to pivot from pochoirs to contemporary abstract paintings underscores how nimble an art advisor’s role can be. They advise, facilitate and “work with buyers and sellers to negotiate a mutually beneficial sale for both parties,” Hirshberg explains. Advisors differ from galleries, as they can assume all the duties of a gallerist and work alongside them as representatives of collectors or artists. The advisor connects collectors with an already-vetted artwork. “But we are not limited by the number of artists that a typical gallery can fit on their walls,” she says. “We have many dimensions: We work with private clients, museums, art experts and dealers throughout the world.”

Hirshberg’s go-to advice is: “Let your heart guide you. Acquiring a piece of art is like falling in love.”

Let us guide you with your next art endeavor

Or Call Us Today